All Collections
Patent Prosecution with Juristat
Examiner Analytics
The "Other" Filters

What are the filters under the "Other" tab and why do they matter?

You might have noticed the section of filters labeled "Other" on our Examiner and Business Intelligence Reports. The "Other" section is a catch-all for different features of applications that you may want to use to narrow down the set of applications you're analyzing. Below we'll take a look at each section and why it may matter for your analysis. 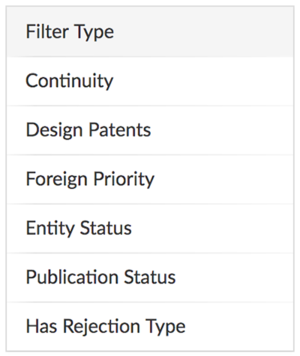 The Continuity tab includes filters for various types of applications.  You can select to see only Continuations, Continuations-In-Part, Divisionals, Reissues, Reexaminations, or National Stage Entries.

It's pretty well known that design patents overall have a much higher allowance rate than either utility or plant patents. To account for that discrepancy, we allow users to filter design patents out of their data set.

At first blush, comparing these two firms on Company A's Business Intelligence report may lead you to believe that Firm 1 is doing much better work for Company A; however, if we filter out design patents, we may see Firm 1's allowance rate drop quite a bit. Thus, it's always a good idea to make sure we're comparing apples-to-apples as much as possible when evaluating both firm and company performance.

As with the design patents filter, you can use this filter to exclude foreign priority applications from your analysis.

This filter allows the user to elect to include only applications filed by undiscounted, small, or micro entities (or any combination thereof).

Why it matters: When using Examiner Reports to illuminate patterns or preferences in your examiner's past prosecution behavior, it helps to narrow your data set down to those applications that are most similar to your own. If you're filing on behalf of a small or micro entity in particular, you may want to select to see only those applications in your examiner's report.

Why it matters: This is an important filter to be aware of. Obviously, Juristat only provides data on publicly available information. Including applications that are unpublished for the duration of their prosecution and are only public if and when they are granted means that law firms, companies, and examiners can have artificially high allowance rates when these applications are included in the data set (depending on how many there are, of course).

It's logical but important to note that filtering to see only granted unpublished applications will show the examiner, firm, or company as having a 100% allowance rate, but other metrics, such as timing data, can still be instructive. In addition, using the overall allowance rate for a company or firm and the number of granted unpublished applications, you can get an idea of the extent to which the company or firm files unpublished.

This filter allows the user to include only applications that have a particular type of rejection included in the prosecution history.

Why it matters: Ever wonder how easy or hard it is to overcome your examiner's Alice rejection? Using this filter, you can limit your Examiner analysis to only applications receiving the same rejection types as yours, or you can see how different companies or firms perform after receiving a particular rejection type.