How does Juristat collect and organize assignee patent prosecution data?

Written by Drew Winship
Updated over a week ago

In order to compile competitive intelligence information for any assignee, Juristat must collect all the published applications and granted patents for the assignee together to perform an analysis. Finding all the applications for a given assignee isn't quite as simple as just running an application or patent search. USPTO data can contain hundreds (or thousands) of assignee name variations for a single company including misspellings, typos, alternative names, subsidiaries, divisions, etc.

For example, Juristat's report for IBM includes applications filed on over 4,000 different versions of the name "IBM".  A small sample of the variation in names for IBM is below:

Juristat's data scientists carefully curate applications to compile a single report for any given entity, collecting all of these alternative names and subsidiaries together into a single report to provide the most complete picture of an entity's patent prosecution metrics possible.

Why can't I find a company that I know has applications?

If you're searching for an assignee in the main search bar or in the assignee filter and finding no results, there are two possible reasons:

1. The assignee you're looking for is a subsidiary of a larger company. 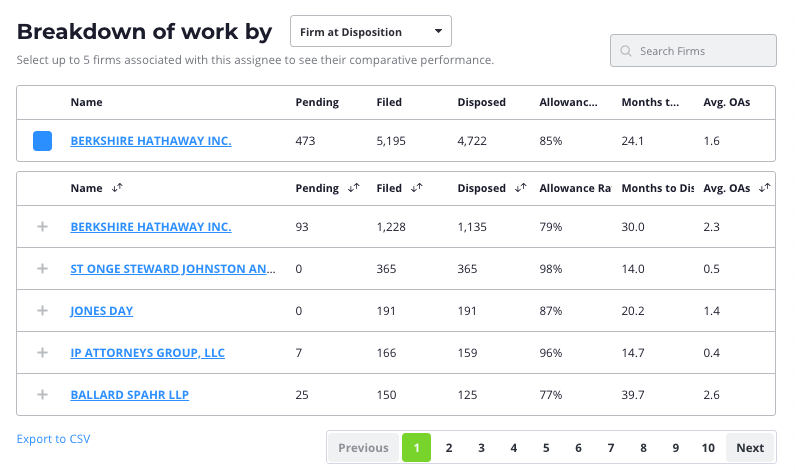 The top row of the table shows Berkshire Hathaway's total number of filed and disposed applications. This includes the applications for Berkshire Hathaway's many subsidiaries, including Lubrizol Corporation, Duracell Inc., Benjamin Moore & Co., and many more. Juristat does this because every organization is different. Some parent organizations may oversee the patent filings of their subsidiaries while others may take a more hands-off approach.

Many of our clients wish to see an organization's entire patent portfolio at once; however, if you'd like to see the subsidiaries included in a parent organization's metrics or run an intelligence report on a subsidiary by itself, you can do so using the raw names filter.

Even if a company is large, it doesn't necessarily mean that it files a lot of patent applications or has a large patent portfolio.  For example, consider Wal-Mart Stores, Inc.  Wal-Mart is one of the largest employers in the country and yet, it has relatively few granted patents. In 2015, Wal-Mart Stores, Inc. received roughly 72 patents. While that may sound like quite a few patents in isolation, compare that to IBM, our example above, which received over 7,000 patents in that same year.

As discussed above, Juristat's data scientists carefully curate applications together into a report for any given assignee. However, with over 30,000 entities receiving patents in a single year, Juristat prioritizes the curation of data for larger volume filers unless we know that a smaller filer is important to our clients. If you need to quickly find information about an entity like this, again, you can do so using the raw names filter.

So how do I get the data about smaller filers or subsidiaries?

Also, we're happy to quickly compile a report for you for any entity you're interested in (most often, within 24 hours). In addition, if you're putting together information for a presentation, client pitch, or project, it's always a good idea to give Juristat 24 hours notice so we can make sure the data presented in a company's Intelligence report is as complete and up to date as possible.