Learn how to navigate Juristat Platform and Business Intelligence to compare competitor companies or firms.

Our clients often want to compare the performance of two assignees against each other. Below, we'll walk through a comparison between two assignees to provide a framework for your analysis.

**This article is for purposes of demonstrating the methodology of comparing two assignees' competitive intelligence information. The exact metrics and statistics displayed here may change as applications are published, allowed, or abandoned, and any subsidiaries are added to or separated from their parent organization.**

Pulling up the Business Intelligence reports for Ford and Toyota in side-by-side browser windows or tabs allow us to get an initial comparison of the overall performance of the two companies. 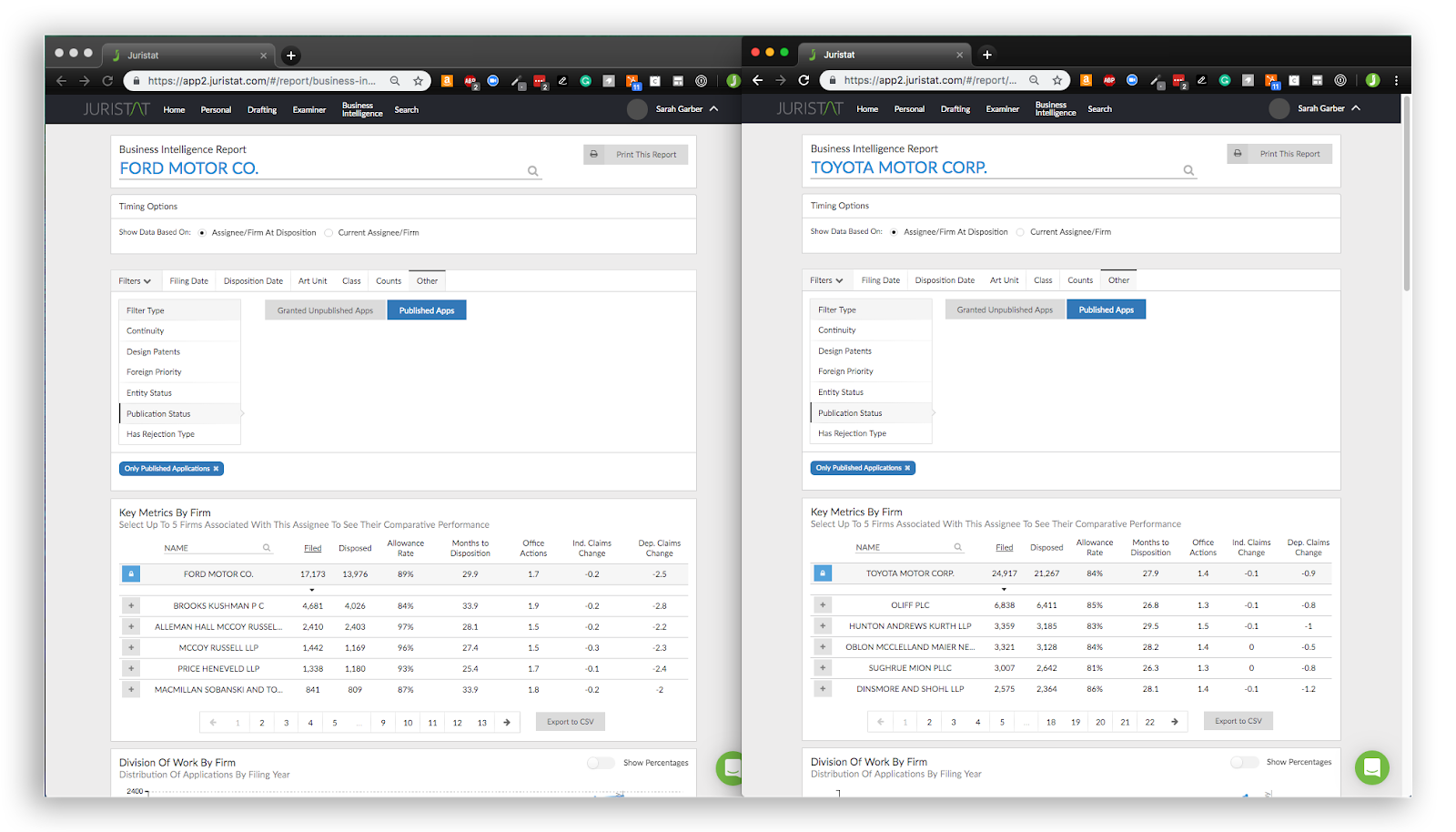 Juristat Tip - We strongly recommend applying the "Published Apps" filter when viewing these reports to prevent any artificial inflation of allowance rates due to applications filed with a non-publication request.

By comparing the top line of the Key Metrics table for each company, we can see that Ford has a slightly higher allowance rate for published applications, as well as a slightly longer time to disposition and number of office actions to allowance.  This may indicate Ford continues prosecutions longer than Toyota, and perhaps gets a few additional allowances as a result of using that strategy.

While overall information can be helpful, it doesn't account for differences in the composition of two companies' application portfolios.  For instance, Ford may be filing more in a particular class than Toyota, or vice versa.  Digging in to specific technology areas and classes can help to ensure we're making a fair comparison between the two companies.

If we head to Platform and apply an assignee filter for Ford Motor Co., we can then open the USPC filter to see a list of USPC classes, ordered by the number of applications Ford has filed assigned to each.

However, what we are more interested in is what classes are most frequent for Ford's current filings (i.e. where is Ford currently investing its IP resources?).  When we use the status filter to view only Ford's pending applications, we can see that USPC Class 429 jumps to the second spot on this list.

In addition, by clicking over to the charts view of Ford's Class 429 applications (after removing the "pending" filter), we can see that the filings in this class were relatively flat for many years, but saw a significant jump after 2011.

Since we’ve identified Class 429 as one that Ford appears to be investing increasing resources, it makes sense to compare Ford’s performance and filing rates in this class against their competitors.

To start to compare Ford’s Class 429 metrics with Toyota’s, it’s easiest to open two browser tabs or two browser windows in order to be able to view each company’s metrics at the same time. 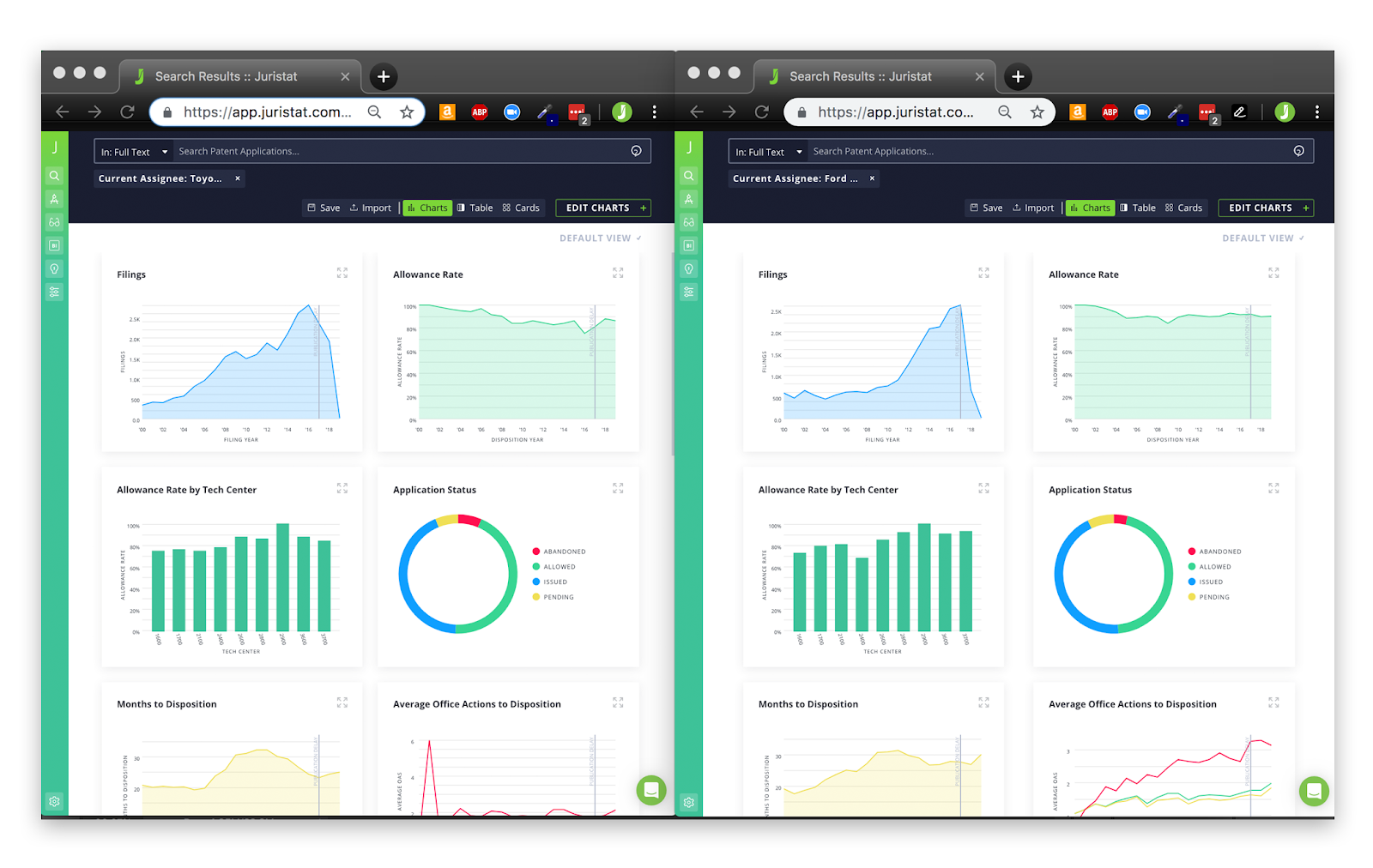 Compared to Ford, however, Toyota has been bulking up their patent portfolio in this Class for quite some time - since, roughly, 2005.  Toyota also has about three times as many pending applications in this class as Ford.

The USPTO describes Class 429 as a "generic class for devices which produce an electrical current by means of a chemical reaction or change in physical state (e.g., from liquid to gas, etc.)".  In the context of Ford and Toyota, the applications assigned to this class typically relate to batteries and fuel cells.  Ford’s recent uptick in filings in Class 429 may indicate Ford is attempting to catch up with the competition in the area of battery and fuel cell technology.

One more check of the Ford and Toyota Business Intelligence reports allows us to see how each company is performing on published applications assigned to Class 429 specifically.

Ford’s allowance rate is seven percentage points higher than Toyota’s but, like we saw in the overall comparison at the beginning of this article, Toyota maintains fewer average office actions and a slightly faster time to disposition.

If we’re looking at very similar applications by filtering to only Class 429 applications, we might ask what can account for the discrepancy?  Below, we’ll use Platform’s Table View and export features to dig into each company’s prosecution strategy.

To dive into differences in prosecution strategy between Ford and Toyota, we can take a look at Platform’s Table View and, in separate tabs or windows, filter to either Ford or Toyota.

Table View provides the ability to add any number of columns with pieces of information about each application.  For example, you can add a column for the number of office actions, appeals, interviews, amendments, and RCEs filed in a prosecution.  You can also add columns relating to an application’s examiner, such as the examiner’s allowance rate, or the allowance rate for applications with or without an interview.  A full list of available fields is available here.

We’ll use Table View (and exports from Table View) fairly extensively from here on.

We’ll do the same for Toyota’s pending Class 429 applications (in a separate window), and as we start to look at some of the information, it appears that there is a difference in the frequency with which Toyota and Ford elect to appeal in applications that are in long prosecutions.

In order to see how much of a discrepancy is really there, we can use Juristat’s export feature to export these tables of applications to .csv files.

From the .csv export, we can use Excel (or your preferred spreadsheet software) to determine the average number of appeals per application.

If we use Excel to filter to applications with three or more office actions and average the “Num. Appeals” column in each spreadsheet, we can see that the average number of appeals per pending application for Toyota is .08, while Ford’s average is nine times higher at .72 appeals per application.

Conversely, if we use the same filter (pending applications with at least three office actions), we see that Toyota is more likely to interview.  The average number of interviews per application for Toyota is 1.04 vs. 0.44 for Ford.

Ford’s higher propensity to appeal may be one contributing factor to its slightly higher allowance rate and longer time to disposition, while Toyota appears to rely more heavily on interviews.

If it appears that one company is outperforming another even when controlling for publication status and the type of technology being claimed, there can still be outside factors at play.  Table View can also provide insight as to the other factors that can influence a company’s metrics.

By adding some additional columns in Table View and taking a look at Toyota and Ford’s disposed (allowed or abandoned) applications in Class 429, we can assess if there’s a difference between the average examiner and art unit allowance rates between Ford and Toyota Class 429 applications. 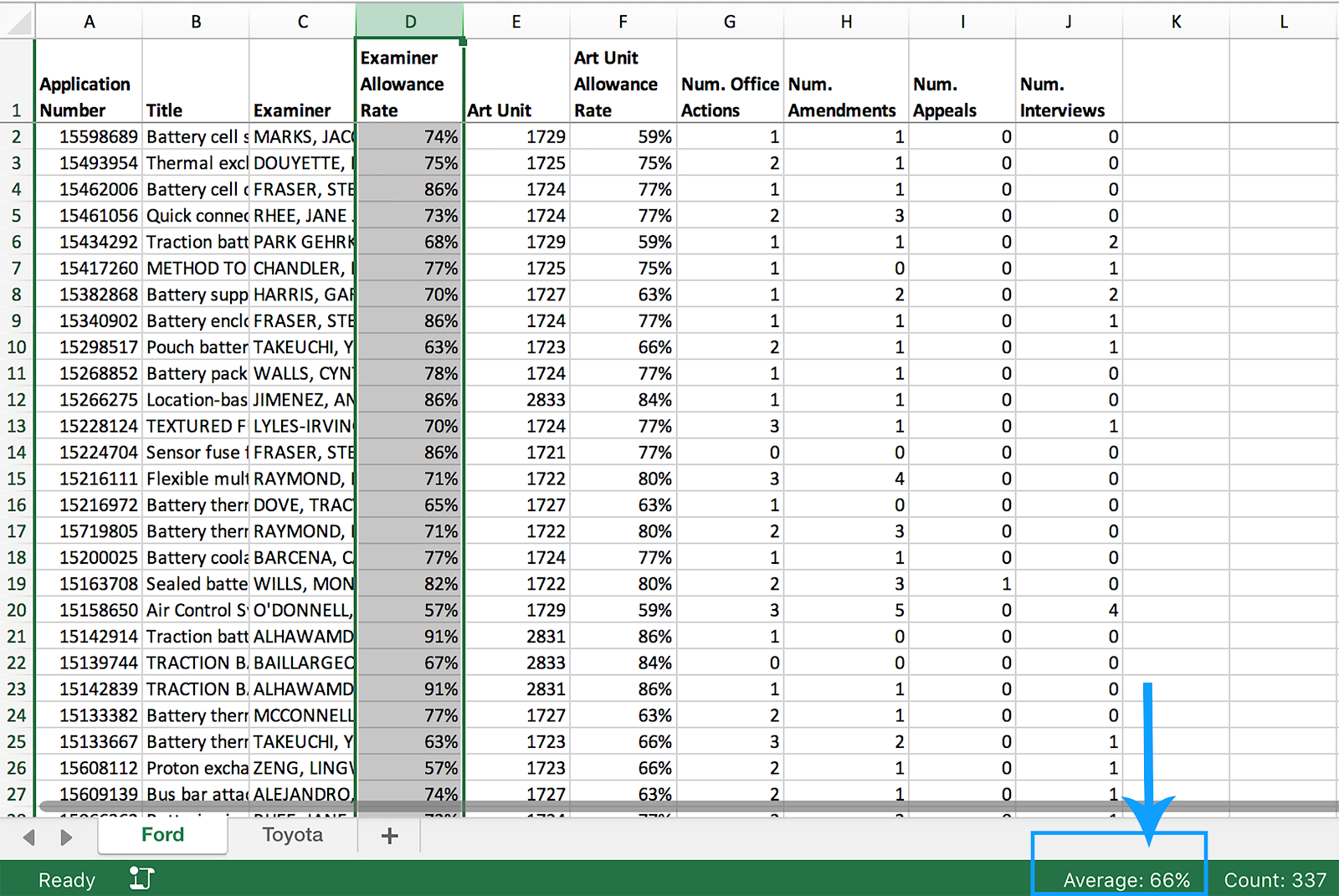 Juristat Tip - to quickly get the average of a column in Excel, highlight the entire column and the average will appear in the bottom right corner of your Excel window.

The process we went through above, first taking a look at overall performance, then looking more closely at the volume, performance, and strategy in a particular class, can be repeated for any specific class or technology area that you’re interested in investigating as a point of comparison.

The above example is one method of comparison between two entities, but we can also use Platform and Business Intelligence to compare companies and firms across many different metrics. For any questions about the availability of specific information, please don't hesitate to contact us.